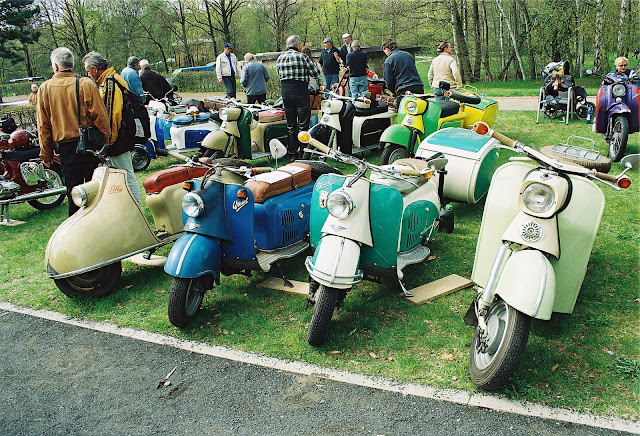 The range of IWL scooters - Pitty, Wiesel, Berlin and Troll (and in the rear, a Campi trailer)

VEB Industriewerke of Ludwigsfeld (IWL) was established on the southern outskirts of Berlin in 1936 by the Daimler-Benz company to build aircraft engines. Being a military industry, the factory was severely bombed during the Second World War and, as part of reparations the Soviets dismantled and removed everything that could be salvaged from the damaged factory. IWL's 11 empty assembly halls lay in ruins until 1950 when the nationalized automobile conglomerate, VEB, approved their reconstruction. As in the west, the government desperately needed to re-industrialize and provide jobs for a destitute workforce. After six months reconstruction the IWL factory began to function again, first producing machine tools, pots and pans, wheelbarrows and farm machinery and eventually Soviet aircraft engines under license.

East Germany had the same desperate need for transport as West Germany and few functioning factories. VEB began to reorganize factory capacity and in 1954 VEB approved the manufacture of scooters as cheap mass transport. None of the existing companies had any experience with scooters, so the contract was allocated to IWL. 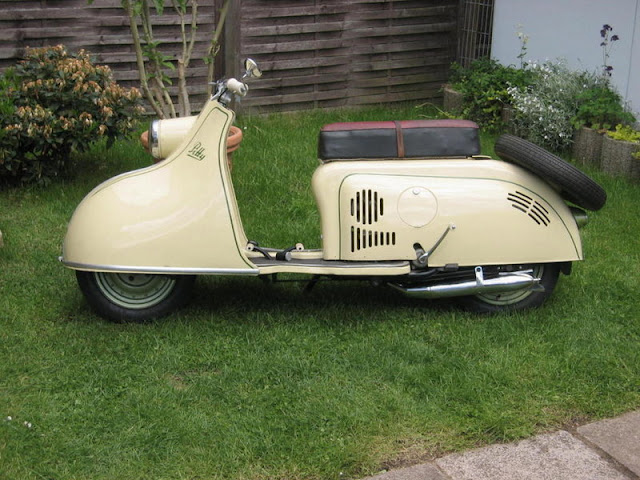 The Pitty was IWL's first scooter and began rolling off the production line at the beginning of 1955. There was nothing original in its design. IWL had developed three different prototype bodies, all based on contemporary western designs, but eventually settled on a design modeled on the Goggo. IWL was responsible only for the body and assembly. Parts and fittings were sourced from a number of different state owned companies and the engine was supplied by East German motorcycle concern, MZ (Motorrad Zchopau); formerly DKW's pre-war motorcycle plant. This arrangement would later prove very useful to a later generation of IWL restorers, as interchangeable MZ and Simson parts are still widely available.

The Pitty's engine was MZ's 123cc two-stroke engine, formerly employed in the IFA RT125 motorcycle. The engine delivered a maximum of 5 horsepower with a reputed top speed of 70 kph. That claim however was never likely to be achieved by the Pitty, weighed down with so much excessive bodywork. Nevertheless, the use of twelve inch wheels gave a certain degree of stability, despite its solid suspension. The Pitty came in three colours - green, red/brown and black. Production ceased in April 1956 after 11,293 Pitty's had rolled off the production line. https://dkwautounionproject.blogspot.com/2020/04/1954-iwl-pitty-brochure.html 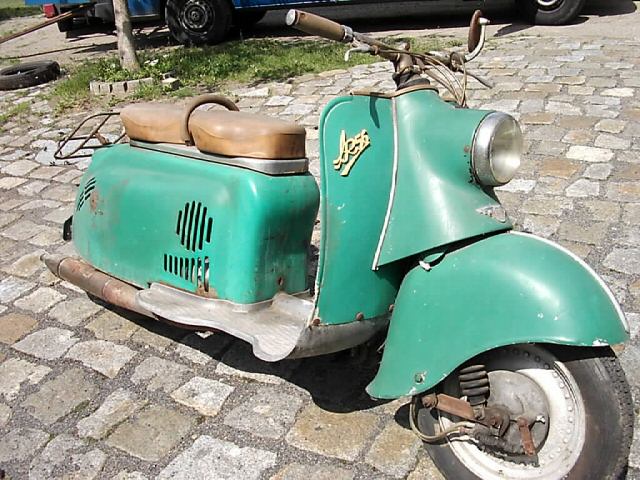 The East German motoring authority had been disappointed by the Pitty. There were numerous complaints from customers about the scooters slow speed and poor handling. The placement of the exhausts came in for specific criticism as it was easy for the pillion passenger to burn their leg. A series of improvements were presented to IWL for action.

In 1956 IWL released the Wiesel as an improvement over the Pitty. Gone was the fixed nose faring that had made the Pitty look so slow and sluggish, replaced by the more traditional moving fender. But apart from a small change to the rear suspension, the Wiesel was otherwise mechanically identical to its predecessor. The motoring authority was outraged that their suggested improvements had been effectively ignored. Nevertheless, 56,000 were built before production ceased in 1959. The Wiesel came in three colours - red, grey and black.

Introduced at the same time as the Wiesel was the Campi single wheeled trailer. Fixing to a connection on the rear spare wheel, the Campi significantly improved the scooter's utility and carrying capacity. 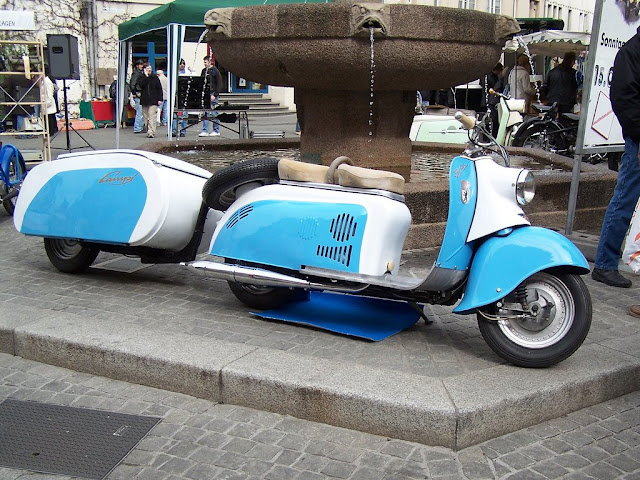 With the Berlin Stadtroller (city scooter) IWL finally hit its stride. In appearance and styling, the Berlin was similar to the Wiesel, but the engine 123cc had been bored out a 145cc,giving the scooter a top speed of 82kph. The Berlin also had a 4 speed gearbox and rider comfort was improved by the addition of a rear shock absorber, longer front arm suspension and sprung seats. It also had a number of advanced features, such as seven starting settings, with cold and hot starting in summer and winter. It also featured an anti-theft lock, something that customers had vocally complained about since the Pitty. The placement of the exhaust was still problematic however.

Styling was also enhanced by a new two-toned paint scheme, with the combinations of green/white, orange/white, light blue/white and black/white. The Berlin was IWL's best selling and best loved scooter. 113,943 Berlins were built between 1959 and 1962. Many thousands are still on the roads today in Germany and elsewhere around the world. 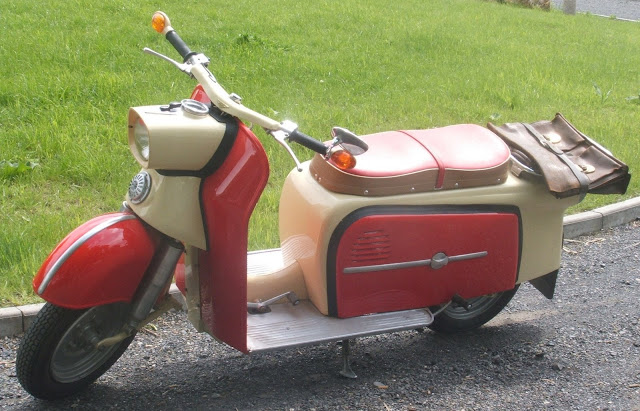 With the Troll, or 'Touring Scooter', IWL took the lessons from the Berlin to the next level. The engine was still the same but the body was restyled, becoming squarer, longer and larger. The higher seating made for a more comfortable ride, as did the new shock absorbers on the the front wheel and the improved seats. With a top speed of 90kph, IWL delivered a cruising scooter that was solid, mechanically reliable and capable of comfortable driving over long distances. The troublesome exhaust was now placed under the footplate where there was no risk of passenger or rider burning themselves. However, by increasing the size of the scooter, a new problem was created. The large, slab sides made the scooter highly susceptible to cross winds.

The Troll never matched the success of the Berlin and only 56,531 Trolls were built between January 1963 and December 1964. At the end of the production run IWL stopped manufacturing scooters and concentrated on trucks. The Troll came with a two tone paint scheme like the Berlin - red/white, light blue/white and black/white. 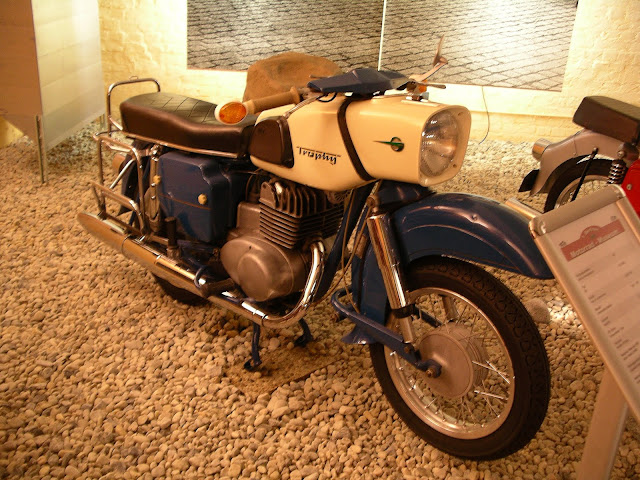 VEB transferred IWL's scooter production to the motorcycle manufacturer, MZ. MZ were already building a similar spec motorcycle, the ET150, which shared many components and styling with the Troll. After reviewing the Troll's design, MZ decided to discontinue production.

Today there is a dedicated following for IWL scooters in Germany and many thousands are still on the roads today. The Berlin remains the most popular. The unfortunate Pitty is the rarest, most having been junked years ago. The use of MZ engines and running gear has made restoring and maintaining IWL scooters very easy as there is abundant supplies of all spare parts. There are also many remanufacturers of fittings supplying the Ostalgia market. Of all IWL products, probably the most desirable is the Campi trailer, which fetch prices around 2000 euro. 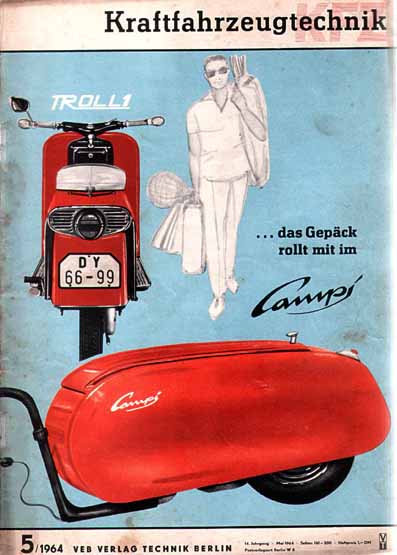 Ludwigsfeld Museum
Here's a link to the museum in Ludwigsfeld. It's all in German but it does have some interesting photos, especially those showing the war damaged factories being cleaned up in 1948. There are also some photos of IWL-IFA trucks that were manufactured between 1964 and 1990.
http://www.museum-ludwigsfelde.de/
at October 01, 2018

Email ThisBlogThis!Share to TwitterShare to FacebookShare to Pinterest
Labels: IWL