The DKW FX - the would be successor 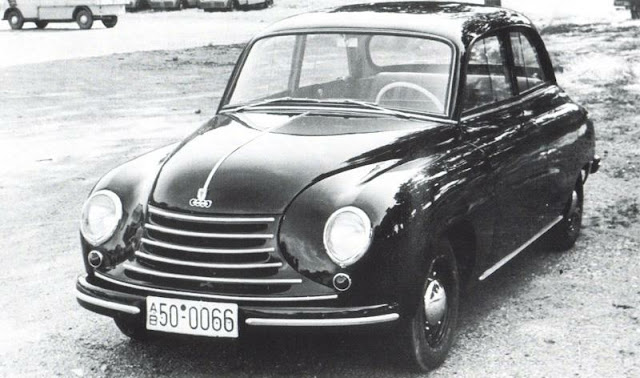 In 1949 Auto-Union was struggling back to its feet after the devastation of the Second World War. The company had two vehicles on the market; the Schnellaster utility vehicle and the RT 125W motorcycle. As yet the company had no personal vehicle in the market, but as a stop gap, Auto-Union had contracted a new steel bodied version of the prewar F8 from the Bauer karosseriewerke, designated the F10. The company’s recovery hopes rested on the F89P new Meisterklasse, the compromise vehicle that combined the pre-war F8 chassis and engine with the streamlined steel body of the stillborn F9 of 1940. The new Meisterklasse was due to hit the market in 1950. 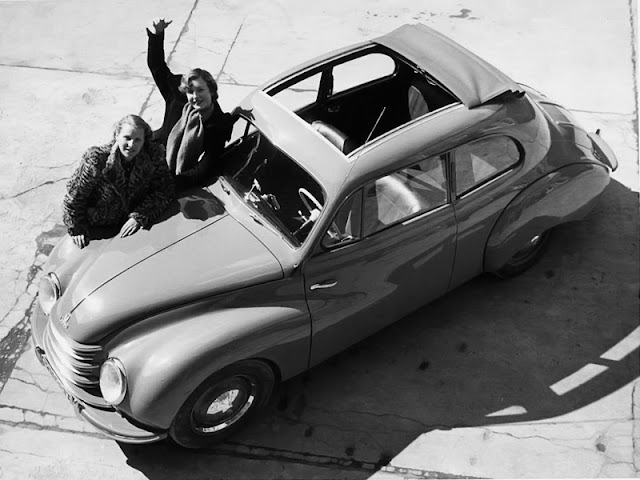 While all this flurry of activity was transpiring some in the company were thinking about the future. Auto-Union's range were all pre-war designs and if the company was to recover its place in the market it would need a new, modern, post-war designed car. Engineer Kurt Schwenk had designed the company's first vehicle, the DKW F89L Schnellaster utility shortly after the Central Parts Store for Auto-Union vehicles had been established in 1946. The Schnellaster introduced the world to the 'cab over engine' format that remains the standard for commercial vehicles to this day. In war devastated Germany it was the right vehicle at the right time and helped Auto-Union struggle back into the vehicle manufacturing game. 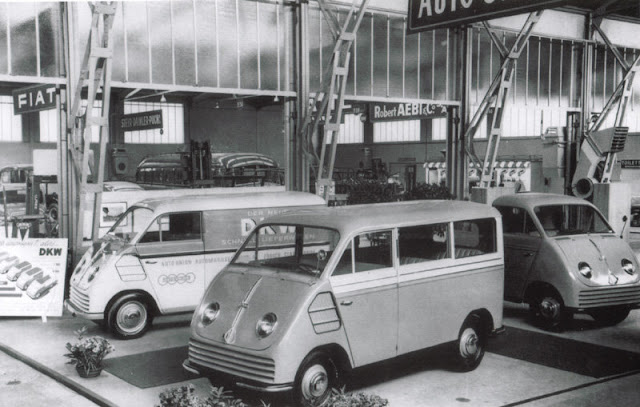 Next Schwenk began working on a radical new sedan design. Unlike Auto-Unions previous cars, which were all separate body and chassis, Schwenk's design featured a unitary steel pontoon body. The pontoon body was a radical, though not unprecedented, concept. Over in Hamburg, Carl Borgward had recently been released from his imprisonment by the US occupation forces, and had immediately set about reconstituting his auto empire. The first Borgward car to hit the market was the budget Lloyd 300. This little car was criticized everywhere for its cheap wood and leatherette construction. Few noticed however, the cars radical pontoon body style that extended the body to incorporate the wheel arches, doing away with fenders and wings and maximizing space within the vehicle. It's said that Borgward had borrowed the concept from the ubiquitous military jeep and had spent his time in prison studying American car design. The little wooden Lloyd was nothing more than a stop gap model and was soon replaced by a steel bodied version and the more substantial Goliath and Hansa models. 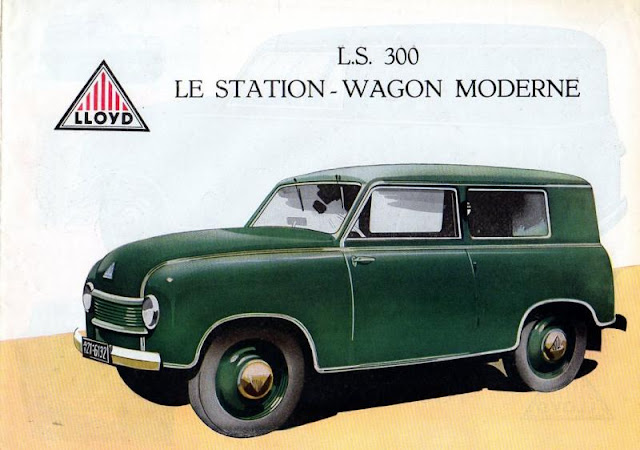 The Lloyd LS300 was known as the Leucoplast bomber due its leatherette body panels. It was a stop gap model that helped get Germany moving again after the war. It was quickly replaced by the steel bodied LS500.

Auto-Union had itself investigated the self-supporting pontoon body concept in 1937 when designing the DKW F9. Fredrich Maher had offered the company his patented self-supporting body method as an alternative to the separate body and chassis method of construction, but DKW had turned him down. Now they began building a prototype using this method. 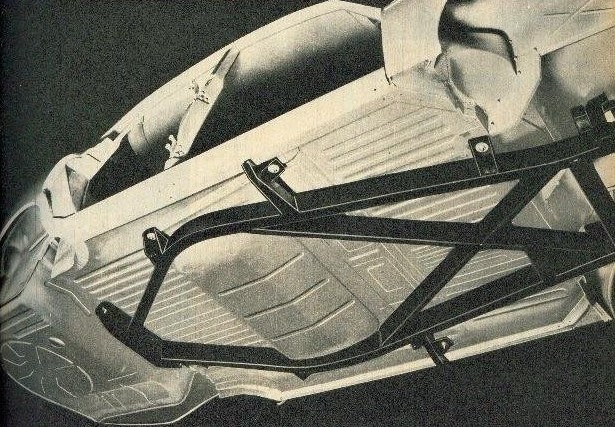 The chassis and underbody of the F93 from a contemporary brochure.

The new car was a four door, modern style sedan with a 1000cm wheelbase. It was be powered by DKWs 700cc two cylinder two-stroke engine; the only engine the company had access to at that time. Like the F89, this would have left the car somewhat under-powered. 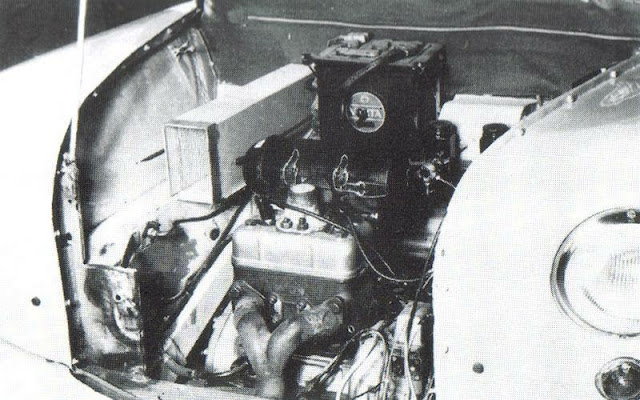 The engine layout in the FX2 prototype highlights the abundance of space in the engine bay. 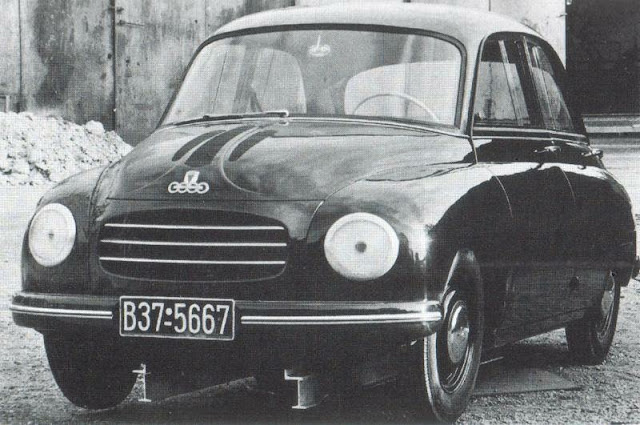 A full size mock-up, designated the FX1, was built at the Dusseldorf office and presented to the executive. The project received their endorsement but then made a decision that would have long term negative implications for the company by inviting a separate team under Karl Jenschke of the new Ingolstadt plant to build a working prototype. There was logic behind the decision as the Ingolstadt plant has just been established to manufacture the new F89 and it housed the company's industrial presses and the necessary production machinery, however, the net effect of this decision was to create competing design teams. 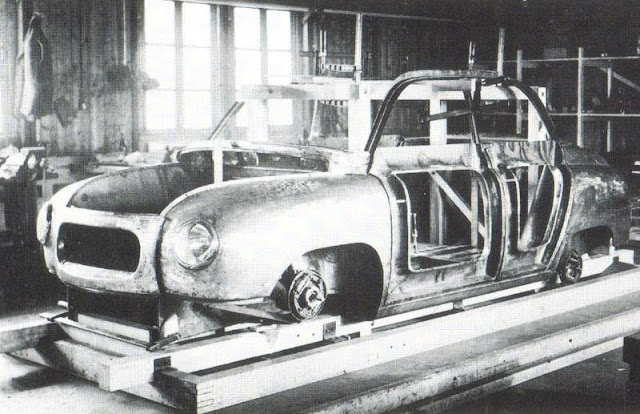 The prototype FX1 comes together on a jig in the Ingolstadt plant. 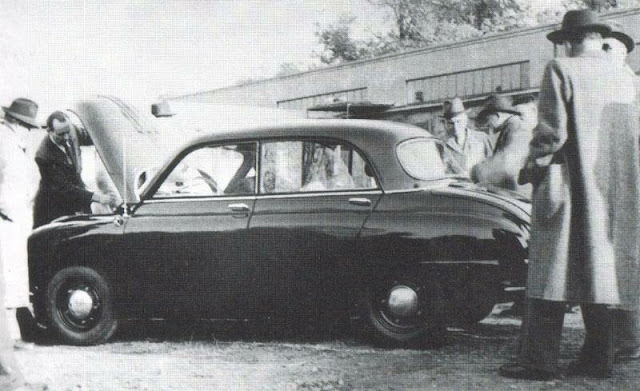 The completed prototype is inspected by Auto-Union management.

The project then returned to the Düsseldorf team, who built a new, improved prototype, designated the FX2. The FX2 was a larger, squarer car and offered the company an opportunity to break into the large car market. The 700cc engine was reworked to deliver 31 horsepower, but it remained under-powered for the size of the car.

The FX2 prototype in two-tone paint scheme. The car was much squarer than its predecessor and featured a totally different grill style. 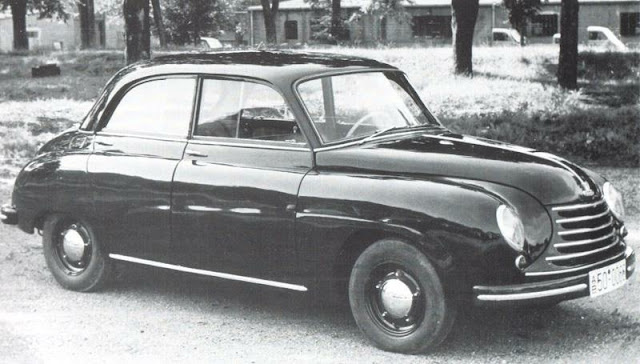 The FX2 appeared promising but Auto-Union management allowed the project to revert to Ingolstadt for further work. Development of an FX3 prototype continued into 1953 but did not progress much beyond a 1/3 scale mock up before interest in the project waned. 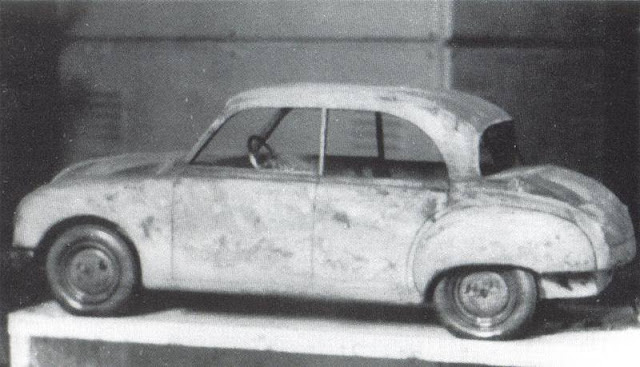 The new Meisterklasse had proven to be a runaway success for Auto-Union, ultimately selling 60,000 units by the time the car was superseded in early 1954. Although the car was only ever offered as a two door coupe/limousine, Auto-Union was never pressured by customer demand to introduce a four door, therefore the cost and effort involved in establishing a new product line no longer seemed worth it and the FX project was quietly dropped. Besides, by this time Auto-Union was focused on the development of the 3=6 engine for the new F91 Sonderklasse, which would also become a runaway success for the company in 1953. 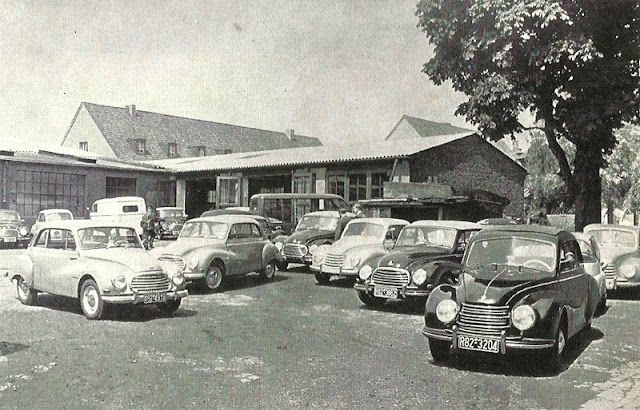 At the time, the demise of the FX project appeared to have few implications, but a troubling precedent had been set. Two rival development teams had been established which would ultimately lead to decision paralysis. Additionally the demise of the first totally new post-war design would leave a creative gap in the company. Designers who could see the future of automotive evolution abandoned the company, which appeared to prefer trading on its pre-war legacy. Rivals Mercedes-Benz, German Ford, Opel and Borgward were soon producing pontoon bodied cars which would dominate the market by 1960. By 1958 Auto-Union had nothing in the pipeline to replace the now old fashioned F93. Despite steady sales the company was in trouble and would soon need to be bailed out by Mercedes-Benz. 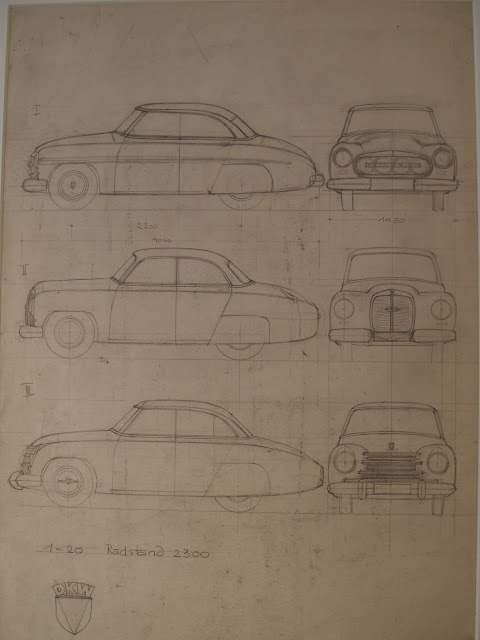 A page of DKW styling sketches from the later 50s at the Prototyp Museum, Hamburg