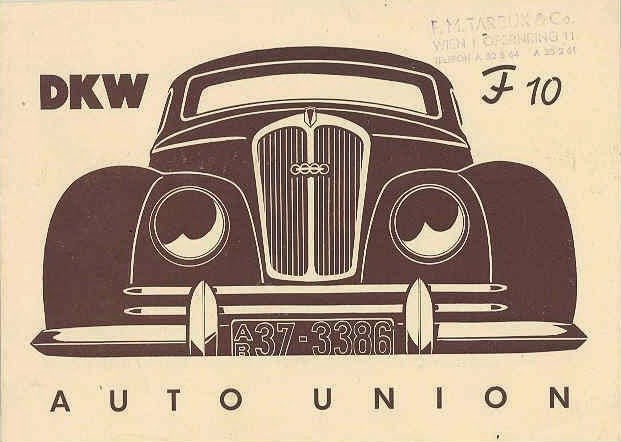 In the chaos of the immediate post-war years DKW was forced to re-establish itself virtually from scratch. The nationalisation of Auto Union’s factories in the east meant not only a forced relocation to the west, but the loss of access to the company’s designs. Some tooling and pre-war engine designs and parts were salvaged from DKW's engine reconditioning plant in Dusseldorf that the company set itself up in. This allowed the company to provide repair and servicing facilities for pre-war motorcycles cars. The next step on the company’s resurrection was to begin assembling motorcycles from stocks of spare parts scattered across the country. From this small start the company raised enough capital to purchase a vacant aircraft plant outside Dusseldorf in 1948 and they began planning a return to car manufacture.

Over in East Germany, the nationalised DKW factory, now renamed IFA, had access to the company’s plans, designs and tooling so they were able to release their own version of the wood bodied, pre-war F8 sedan in 1948. 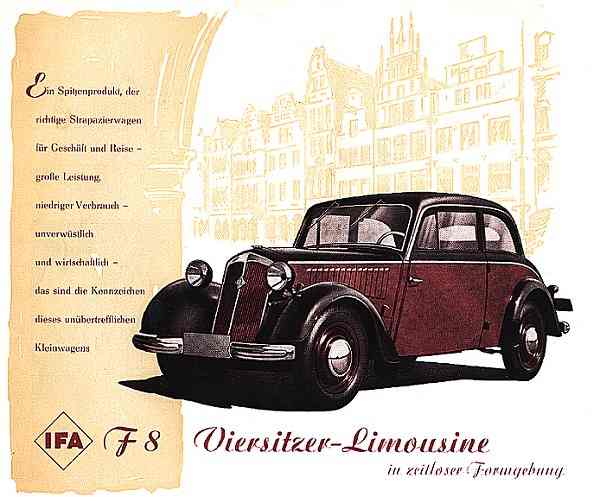 DKW also looked back to the F8 to get back into car manufacture, but having no access to the Spandau Karosserie outside Berlin, they needed find an alternative bodybuilder. They selected Karosserie Baur from Stuttgart, who had long experience with building steel-bodied cars and convertibles. 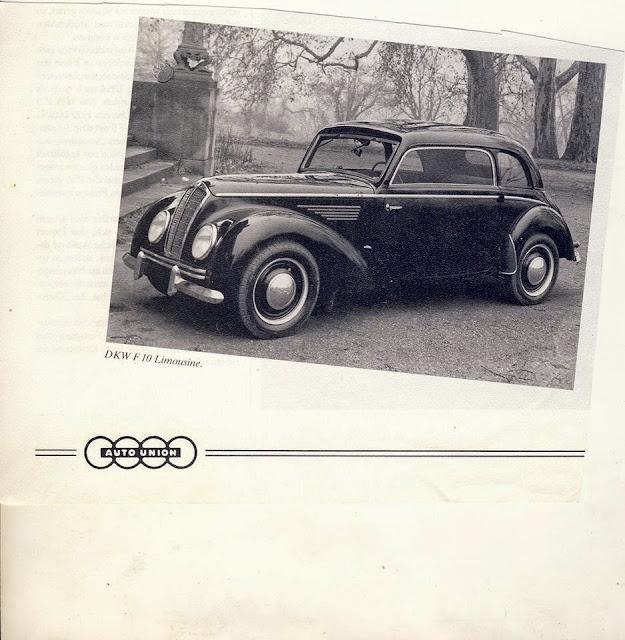 DKW had a stock of 688cc two-cylinder, two-stroke engines on hand, but its stock of F8 chassis was largely made up from damaged and scrapped pre-war cars. In 1949 only 22 new F8 chassis trickled off the production line and were sent to Baur. 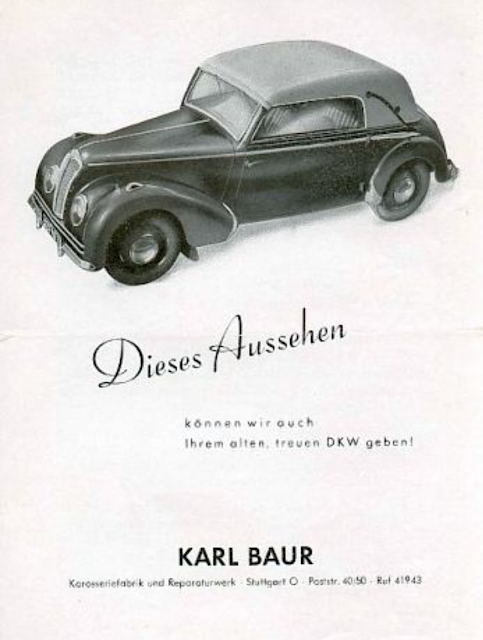 Baur mounted a handsome two door cabriolet on the old F8 chassis.  DKW followed the existing nomenclature for the new car, calling it the F10; the F8 being DKW’s last pre-war car, while the F9 was DKW’s still-born modern, steel-bodied car of 1940. 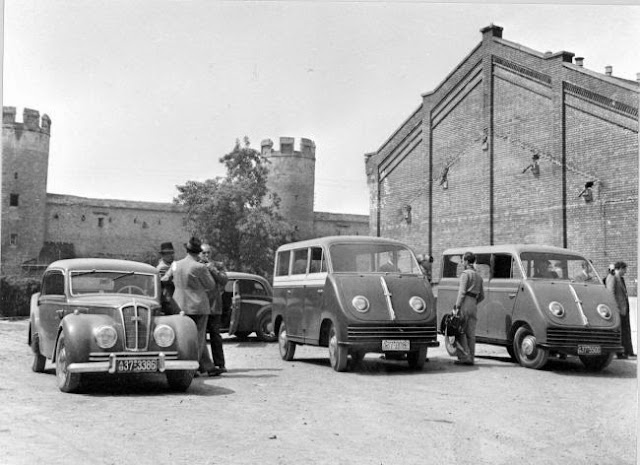 The new car went on sale in January 1950. DKW produced its own F10 advertising, but then so did Baur, reflecting the car’s compromise nature. 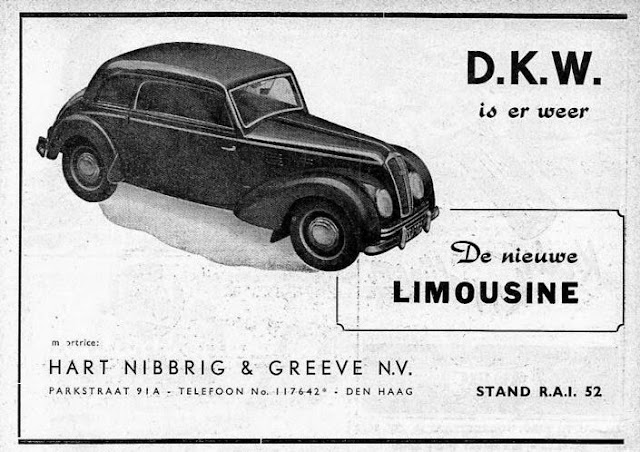 Despite the car’s good looks, it was only on sale for a very short time, being removed from sale in August 1950, after less than 200 cars had been built. By this time, DKW’s Dusseldorf factory was finally ready to begin production of a different compromise vehicle, the DKW F89P. DKW had managed to secure possession of a 1939 F9 bodyshell that had been left behind at DKW’s Spandau Karosseriewerkes. Using the shell as a template, they reverse engineered the moulds for the body presses. The new body was mounted over the modified DKW F8/F10 chassis and engine. By late 1950 the new car was ready to roll out of DKW’s own factory, thereby removing the need for the partially outsourced F10. 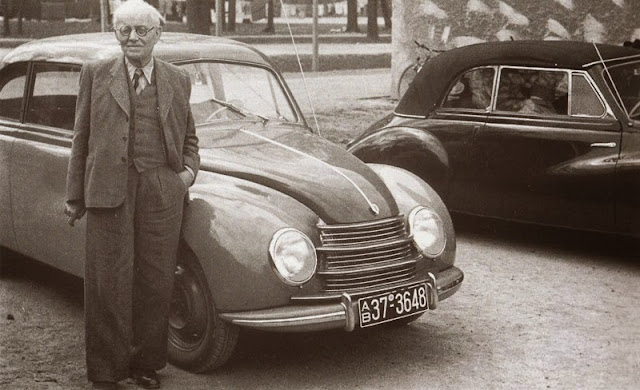 Horch and Audi founder, August Horch, with the new DKW F89. Despite its modern appearance it was effectively a re-bodied pre-war F8, just like the F10.

Nevertheless, Baur continued to manufacture the F10 for some time afterward as a replacement body for older F8s. It’s believed that almost half of the 380 odd F10s built were in fact re-bodied old F8s.

But that wasn't the end. IFA in East Germany approached Baur and obtained the rights to build their four seater cabriolet. IFA built 150 F10s on Baur's behalf. All these IFA built cars were exported outside Germany. 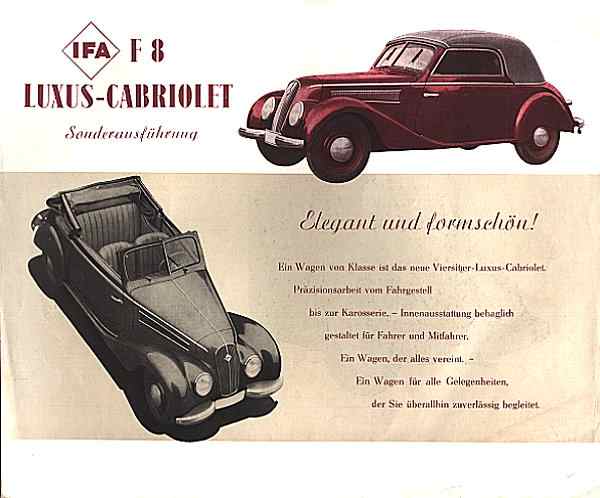 In 1953 the state automotive collective, VEB, restructured the East German auto industry to reduce the number of models being manufactured. As IFA was producing the F9, the older F8 was retired, but several hundred chassis and engines remained in stock. BMW's old factory at Eisenach (EMW) had been instructed to stop producing its handsome EMW 328 roadster, EMW took the opportunity to body the F8s. EMW combined the styling of the Baur cabriolet with their own roadster to produce an delightful looking roadster. The F8 Luxus Cabriolet was targeted at the western export market and more than one third of the 400 odd cars was sold in the west. 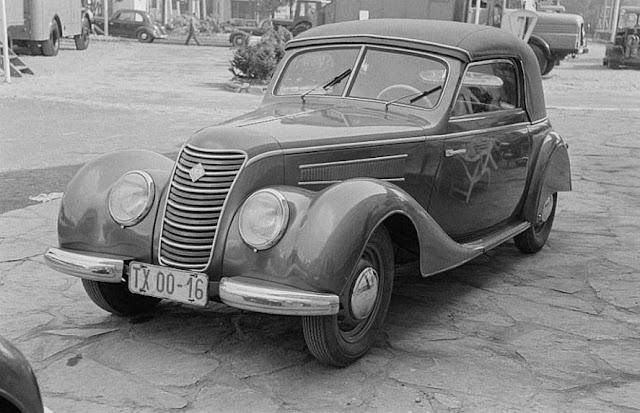